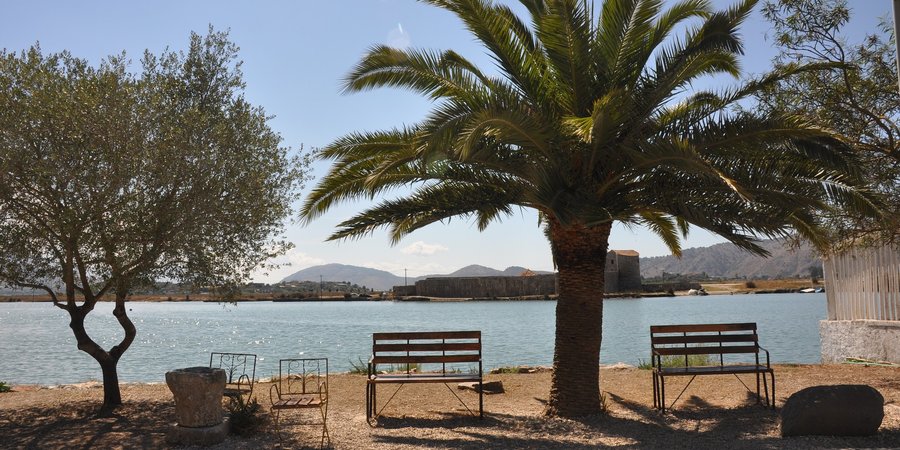 45 minutes from Saranda is an amazingly beautiful place - Butrint National Park. It is protected by UNESCO and is considered the most visited place in Albania. It is an archaeological museum-reserve, where once were the Greek and Roman cities.

It' s a quick ride by car from the seaside resort, if there is no traffic, then 30 minutes will be enough to get to this beautiful place. Here you will get acquainted with ancient ruins and artifacts, see the town of Butrint and enjoy the beautiful scenery, overlooking the valley of the lake of the same name and the Vivari canal. Butrint is the place where nature and archaeology combine perfectly.

Butrint has collected the architecture of several centuries and peoples. The Romans, Byzantines and Venetians left their mark in the form of ancient buildings, which today can be seen in the park. At the entrance you can take a map of the sights and go on an amazing journey through the ancient ruins.

At the beginning of the tourists will meet the ancient Greek theater with marble statues, which is well preserved. Near it are the ruins of the temple and the treasury. Some ruins are in the water, which is inhabited by turtles and fish. Snakes and lizards can also be found. Intertwined with the animal world, the ancient ruins look very harmonious. On the territory remained baths, outbuildings and forums. Around the entire complex rises the partially preserved fortress wall.

Outside the fortress there is an aqueduct, an early Christian basilica and villas of the Roman nobility in almost pristine condition. They have not been destroyed because for a long time the city was swamped and forgotten.

If you climb to the top of the hill, you can see the Venetian fortress, in the basement of which there is a museum. It contains ancient artifacts found during excavations.

What else to do in the park

The ancient ruins are surrounded by subtropical jungle and laurel forest. Therefore, in addition to exploring the historical sites, you can walk through the natural beauty. There are about 800 unique plants, many birds, fish and mammals, among which there are endangered species.

During the walk you will see views of the lake and the majestic mountains. They offer speedboat tours of Butrint Bay. So those who wish can look at the ancient city from the water.

To see all the beauty will have to walk a lot, mostly uphill, but what you see is worth it. There is a cafe on the territory, where you can have a little rest and have a good meal.