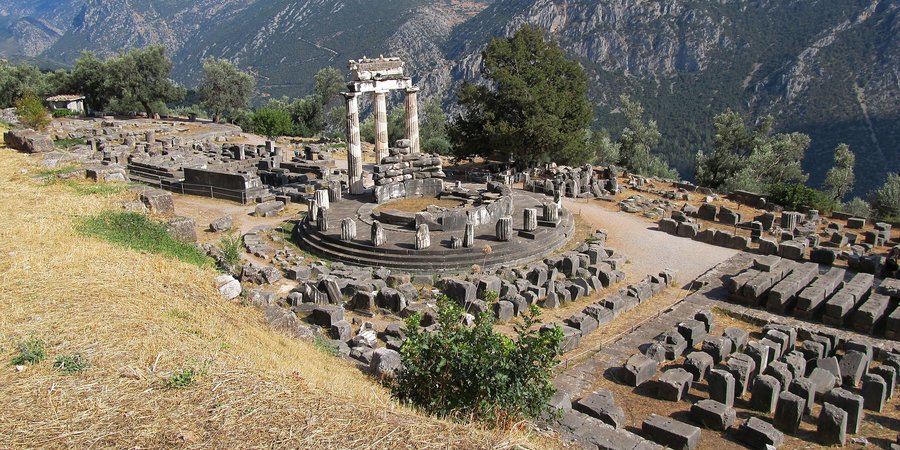 The small, cozy town of Delphi was once considered the center of the world where the pilgrims of Hellas fled. Now it is a Mediterranean resort, which will delight its visitors with many ancient sights, pleasant climate and delicious cuisine.

The city is located near the legendary mountain Parnassus, which is shrouded in legends about the Flood. It attracts travelers with its ancient ruins and nature. Near the ruins is a town with two streets, many cafes, restaurants and stores. There are about 2300 inhabitants.

The distance from Athens is 180 km, so the fastest way to get there by car is 2 hours.

Delphi is a great place for lovers of antiquity and history. There are majestic monuments and archaeological museums.

Most of the ruins have survived, but people come here just for the sake of them. The main attraction is the Temple of Apollo. It used to be a means of communication between the god and the people of Greece. Once upon a time there was a sanctuary with a complex of buildings, statues and treasury. Now the remains of the foundations and columns against the background of the mountains.

The Tholos of Athena is a circular rotunda-shaped structure. Its purpose is still unknown, but it looks beautiful. As opposed to the other structures, the ancient stadium is in good condition. It is located above the temple of Apollo. Nearby is the ancient theater, where you can see the valley and the temple. These majestic structures were once of great importance to the Greeks. Today, they are left with ruins that preserve the great history and atmosphere of antiquity.

Another interesting place is the "Center of the Earth". Legend has it that the center of the earth was determined by Zeus himself, so there is a large stone reminding of this event.

At the foot of Mount Parnassus is Kastal spring. It is considered the sacred key of Delphi. The place is steeped in myth and legend, where creative people were inspired and ritual ablutions took place.

All the remains of the monuments, such as surviving statues, relief jewelry and other artifacts, can be explored in the Museum of Archaeology. Here there is a large collection of antiquities, which amounts to more than 6,000 items.

In Delphi, as in all Greece, love vegetables, cheeses, dairy products and wine. Of the meat they prefer lamb or chicken. The abundance of seafood and fish will delight visitors with unusual dishes.

Be sure to try the Greek salad according to the traditional recipe, grilled octopus, ragout with wine gravy and cinnamon, sheep milk cheese. And for dessert, order baklava, lokma and natural Greek yogurt.

The tourist season starts in May and ends in October. Summers are hot and dry. The maximum temperature reaches more than +30 degrees in July and August. Winter is rainy and the temperature drops to +5 -12 Therefore the most comfortable time to visit would be April-June and September-October.