- A picturesque village with an open-air museum | Armenia 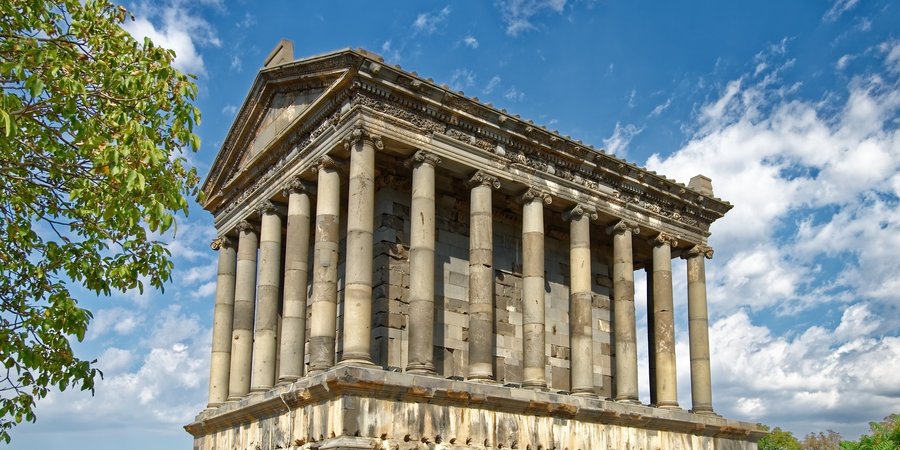 30 km east of Yerevan is the picturesque village of Garni with a museum-reserve of the same name. The complex attracts tourists with its architectural and historical monuments. There is a fully restored pagan temple of the I century and a picturesque gorge.

It's more convenient and quick to come here by rented car. The trip will take about 40 minutes. So you don't have to limit yourself in time, as opposed to taking a guided tour. You will find yourself in a wonderful place with temples from different eras, rich history and beautiful nature, and you can enjoy a lot of local color and atmosphere.

Travelers come to Garni to see the pagan temple of the Sun. It is the only representative of Hellenistic architecture and a true masterpiece in Armenia. Externally, it resembles the Greek temple of Athena. The triangular roof is supported by 24 Ionic columns. The temple is distinguished by a chic finish with ancient Armenian ornaments, bas-reliefs of human figures, carvings with the image of pomegranate and grapevine.

On the west side of the temple are the ruins of the royal palace, a bath with a pre-bath and three baths. It is interesting that in ancient times the floors were already heated. On the floor are preserved images of mosaics with the sea deities and the inscription, translated from the ancient Greek: "Worked without getting anything in return.

The Garni fortress is situated in a landscaped mountainous area with a gorgeous view. It was founded before Christ. The fortress served as a defensive structure and a resting place for kings. It dominates the surrounding terrain on a triangular cape flanked by the river Azat in a deep gorge. In addition, on the territory of the fortress there are ruins of two Christian churches of late construction.

What else to see

There is a natural landmark in the Garni Gorge - "Symphony of Stones". This is a cluster of vertical stone pillars on the slopes of the gorge. It looks incredibly beautiful and resembles a large stone organ.

To get here you have to go down from Garni temple. The descent is steep in some places and one has to walk about 20 minutes. If you have limited time you can admire the "Symphony of stones" from the observation deck next to the temple or by car (10 km).

Also 10 km from the temple is the Geghard Monastery, built near the cave spring with clear water. Its architecture is astonishing, because part of the shrine is hollowed out in a monolithic rock. Geghard means "spear" and not for nothing. In the temple was stored the tip of the spear that pierced the ribs of Christ. Here you can admire the unique architecture, natural grottos and caves.