Godafoss - The Falls of the Gods, considered the pearl of Iceland 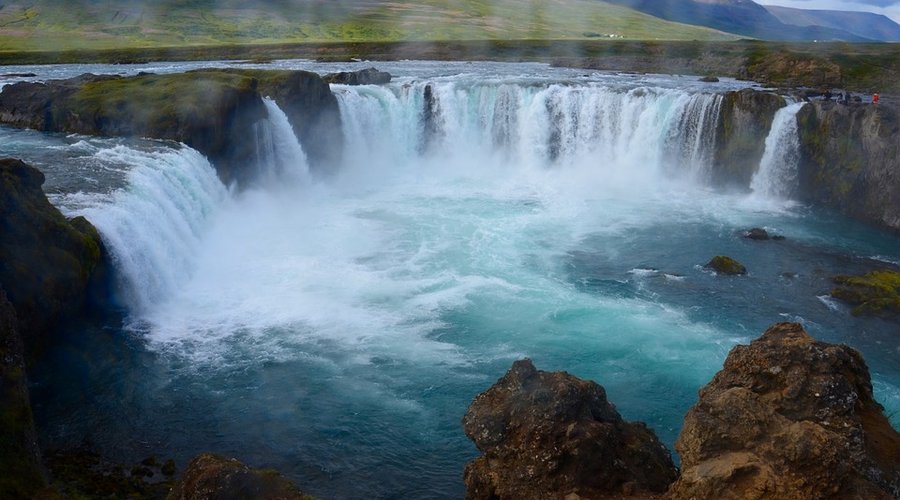 In the northern part of Iceland is the majestic Godafoss Waterfall. It means "Waterfall of the Gods" in Icelandic. The attraction is not only for its power and beauty, but also as a historical and cultural object.

The waterfall is formed by a river that takes its source from a glacier. It comes down with a broad wall of 30 m. The power of the flow raises a haze of splashes from below, which can be seen from afar.

The nearest towns from where it is more convenient and faster to get to the falls on your own are Akureyri, Husavika and Reykjahlida. On average, it takes 40 minutes. If you travel by car from the capital, you have to spend 5 hours on the road. But it is worth it!

An interesting history is connected with its name, which is important for the Icelandic people. During pagan times, the Vikings came here. After the conquest of Iceland, Olaf, under the leadership of Vladimir the Baptist of Russia, tried to introduce Christianity. The people were divided and a civil war could have broken out. But the chairman of the Icelandic parliament was able to solve the problem. He accepted Christianity, while allowing paganism to be practiced in private. Then he threw statues of ancient deities into Godafoss.

Since then the waterfall was called so, and for Iceland the adoption of the new faith passed peacefully and quickly. Which in world history is an exceptional event.

An excellent road leads to the waterfall, so it is not difficult to get here. Nearby there are free parking lots. To make sure there is enough room for everyone, there are spacious viewing platforms on both sides of Godafoss.

There are tables and benches next to the parking lot where you can eat and relax with a gorgeous view.

There are also paths on all sides where you can walk and watch the waterfall from different angles. At the foot there is a descent to the east side, which offers new, steeper views.

Godafoss is worth special attention in sunny weather, when it is decorated with several rainbows. And the water becomes a rich azure color.

Especially for the extreme is allowed rafting on the river in a kayak. You can overcome the waterfall and maybe conquer your inner fears. For the rest of us, there will be an opportunity to watch the daredevils.

You can visit Godafoss at any time of the year. That said, there are some peculiarities to keep in mind when traveling:

Rent a car in Iceland