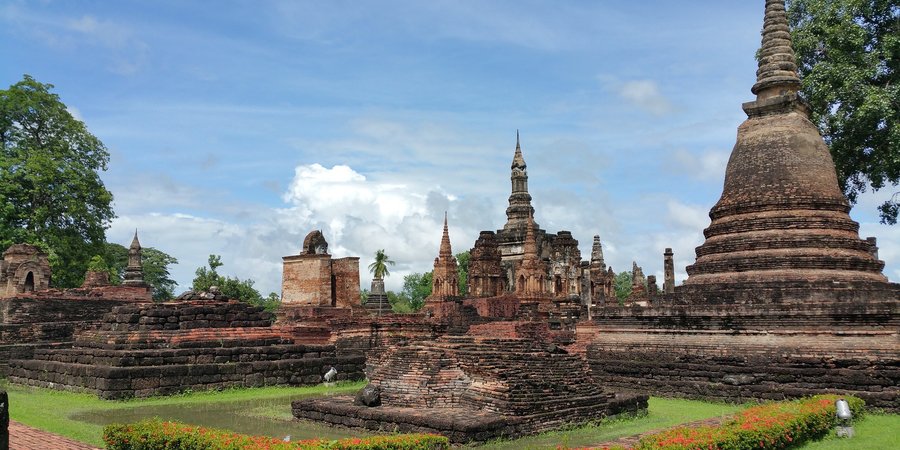 In the past Sukhothai was the capital of Thailand, today the city is divided into two parts: the new (Province) and the ancient (Old City). It is worth focusing on the old part, where the main historical sites of the mighty empire are concentrated.

From Bangkok to Sukhothai you can get by car, but the way is not the closest. The road will take about 6 hours (440 km), but it's worth it. The ancient city will not leave anyone indifferent. This is the cradle of an ancient civilization with many temples, ruins and preserved history of Siam. The development of writing, architecture, culture, and art in Thailand originated here.

The park consists of 3 main parts: the central, northern and western parts. Most of the attractions are concentrated in the center of the park. The most interesting temples, the royal palace and the promenade park with a beautiful pond are erected here. In the evening the area is illuminated and there is an evening market where you can buy Thai food and souvenirs.

Another important temple, but outside the central area, is Wat Si Chum. It is a most unusual temple. A large Buddha in a pose of "appeasement of passions," his fingers and palm covered with hundreds of plates of gold.

At the northern end of the park is a statue of King Ramkhamaeng. He is called the "father of the Thai language" and adopted the updated Thai alphabet, which is still used today. The king was judicious and great, and from his reign began the heyday of Sukhothai.

There is much to see outside the park as well. One prime example is the elephant temple. A very beautiful and symbolic structure for local culture.

From May to November in Sukhothai begins the wet season, when strong winds and downpours prevail. If you do not want to get wet in the tropical rain, it is best to come from November to May. Although starting from March, a lot of heat rises, easily reaching 40 degrees.

So the ideal months to visit the region will be from November to February.